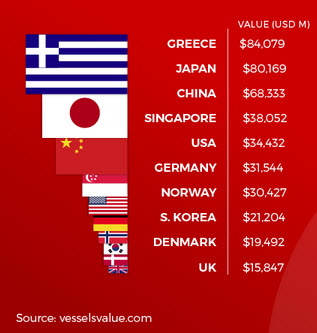 Greece has remained the top shipowning nation in 2016, according to shipping analyst VesselsValue. However, they have lost around 12 percent of their fleet value, and the Japanese come ever closer to stealing the lead, with the value of the Japanese fleet falling less than one percent in value.

In sixth place, down from fourth, the German cargo fleet has lost close to 30 percent of its value primarily due to the compressed container shipping market.

Bulkers have had a deceptively good 2016 following the record lows at the start of the year. The top three bulker owning nations; Greece, Japan and China, have seen their fleets rise by over $4 billion each. This growth has been supported by strong acquisitions following some of the lowest asset prices seen since the 1980s.

The German container fleet shrunk by nearly $11 billion throughout 2016 after large losses in the sector. The largest softening was experienced in the Panamax and post-Panamax sectors with some vessels losing up to 60 percent of their value. German losses are fuelled by this as 59 percent of their fleet consists of Panamax and post-Panamax vessels.

Greek tanker owners started 2016 earning more than $100,000 /day on their vessels. However, the rest of the year has been predominantly bearish. By the end of 2016, the Greek fleet had shrunk by close to $11 billion. Coming in second was the U.S. whose fleet lost $4 billion, less than half of the Greek losses.